Honoring the Nobility of Women 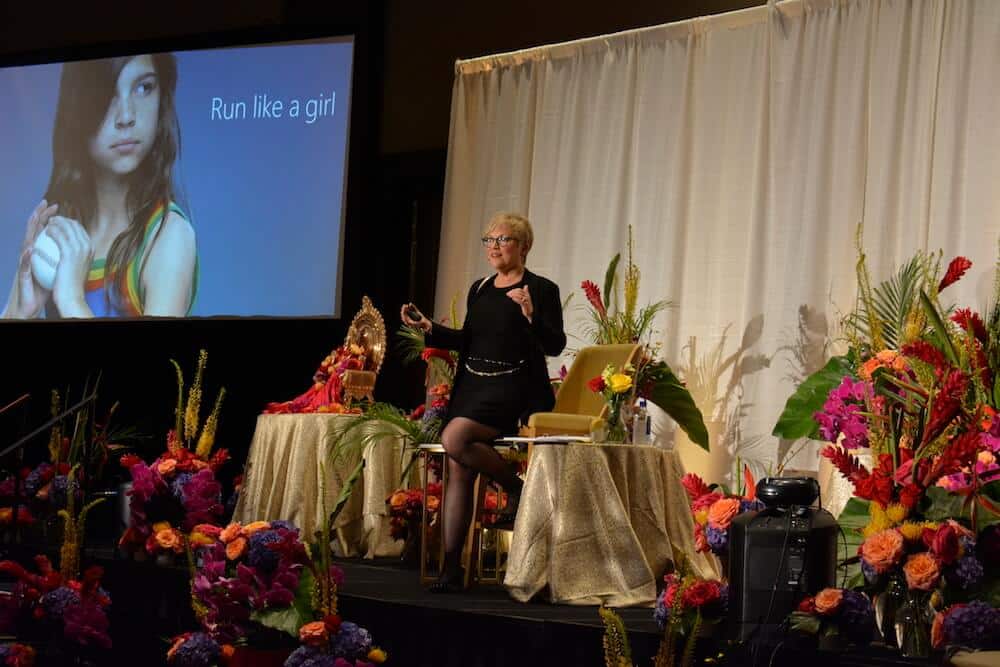 Many facts reinforce this reality for the state of women around the world: 35% of women worldwide have experienced physical or sexual violence, only 50% of women of working age are in the labor force, and at the current rate of female ascension to the C-Suite it will take more than 100 years to achieve gender equity in business leadership. I could go on and on.

But change is in the air. A groundswell movement is building and it feels to many like a door is opening. Women are now faced with a unique question, “What do you do when you get a seat at the table?” When opportunities open, will you step up?

It is this that drew a crowd of 400 to participate in an interactive workshop for a day of rich, fulfilling exploration of the divine feminine. Strains of Meghan Trainor and Natasha Bedingfield bid the crowd welcome into a room vibrating with excitement and limitless potential for transformation—not only of individual lives, but the world.

“Nobility is at the heart. Begins with courage, under that is honor, deep respect, and at the heart is nobility, the nobility that each of us have within us. Each of us have capacity for nurturing, and that is what we are here to kindle today. Today we will be activating a whole new level of nobility, and whether male or female, deepen respect and honor for yourself, as well as all women in the world.” With these words, Lucinda Hanover, H.H. Sai Maa’s successor in the west, welcomed everyone with an invitation to embrace their divine feminine.

We begin with a thought—that gender supersedes geographic culture. In a live attendee poll, audience members from around the world created their own word cloud calling out the top feminine qualities such as love, compassion, tenderness and nurturing, followed closely by others such as multi-tasking and discernment. The power of the visual cloud tangibly demonstrated just how much alignment we all have on what ‘the feminine’ represents. And just how much the world needs these qualities to be manifested across both men and women as part of our collective enlightenment.

Everything is energy. And through the transformative energy of the Nobility of Women session we begin the inner work that will lead to outer service and ultimately a better world.

Balancing the masculine and feminine energies requires us to become aware of the false matrix that exists around roles and capabilities. Self doubt, people pleasing, fear of being outspoken, and crippling standards of perfection… inherent suppression grounded in fear hinders many women from exhibiting their true intelligence and heart.

Men who came to the workshop also wrestled with their stereotypical gender roles. And they welcomed the opportunity to both elevate the women around them and elevate their own cloistered feminine qualities to become more open, sensitive and grace-filled husbands, fathers, leaders and friends.

Inner work and outward service happens simultaneously. As Lucinda shared in the introduction to the workshop, “my wish for today, on this magical birthday weekend, is that you move into a place of expanded love, be yourself, and flourish.”

Historically, for women to succeed in the business world they have had to hone their skill in masculine qualities to a high degree. Both are required, and now there is room to add their natural feminine qualities to their repertoire. I’m reminded of a conversation I had several years ago with Khalida Brohi, a Pakistani social entrepreneur and activist for women’s rights, after she spoke at a women’s leadership conference. She said “American women will never advance until they stop acting like men; until they activate their own divine traits as women and lead from that place.”

What women naturally bring is what is needed in the highly matrixed, competitive business environment of today. A united return to a source matrix that is conscious, authentic and positive. A source matrix that brings balance to men and women and embraces the unique contributions of each human being.

The full expression of this inherent Divine Feminine, in harmony with the Divine Masculine, uplifts us to realize a higher potential for ourselves—and the world.

Think about the import of the Run Like a Girl

What does it mean to ‘be a man?’ Why does ‘like a girl’ have such negative connotations? Watching this blunt showcase of the social biases and preconceived notions that plague the modern world, you can’t help but wonder how we will ever progress beyond the status quo.

But we can—and we will.

What is next to fully embark upon what is stirring in your soul? Are you serving others? Are you spreading your wings and flying?
Women are bringing their gifts, talents, and voices to the world stage and are weaving a new tapestry for humanity. Clearly the time for uplifting women in leadership, politics, and every aspect of society has come.

The door is open and it is time to step through.

“Beauty begins the moment you decide to be yourself.” – Coco Chanel