Listen to Her Holiness Sai Maa’s 2019 New Year’s Global Address. Sai Maa has recommended that we listen to this message for several months, to June or July, on the first Sunday of the month.

During the call, Sai Maa refers to a video clip shown at a recent event in Japan. This is in reference to the movie “Valerian and the City of a Thousand Planets.” The timestamp of the scene Maa is speaking about is: 1:40:27 – 1:41:27.

The drawing below, referenced by Maa in the global address, depicts the journey of a soul from source—we take birth, evolve in consciousness through many lifetimes, eventually returning to source. When we leave the body, our guides take us to a resting place (seen on the right of the drawing) where millions of souls are resting at different levels, depending on their level of consciousness when they leave the physical body. There, as a soul, we prepare to return to earth. 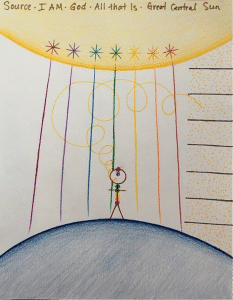