Diwali – the celebration of the return to the Kingdom of Light 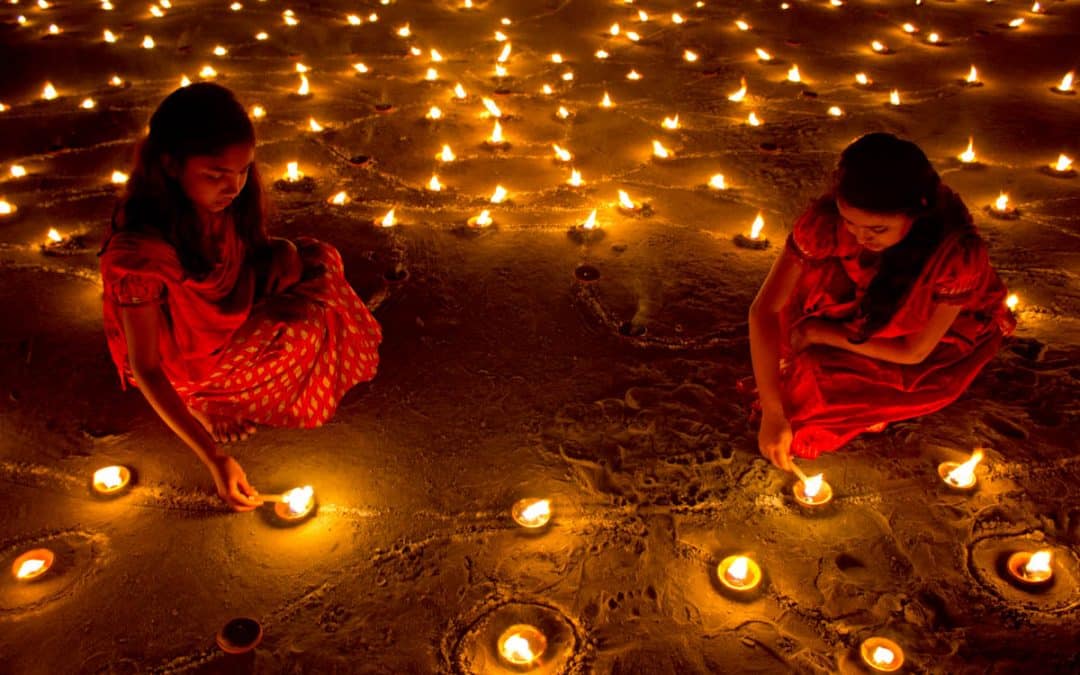 Divine Love is golden, permanent, changeless, and free. Allow the lamp of your heart to be lit and experience the profoundest of spiritual paths. -H.H. Sai Maa

Diwali is a hugely popular holiday celebrated across India by Hindus, Jains, Sikhs, and even some Buddhists, taking place for 4 or 5 days around the middle to end of October in the Western calendar. It coincides with the month’s new moon, known as the amāsvasya – the darkest night of the Hindu lunisolar calendar. Traditionally, it is celebrated by lighting small ghee lamps, often arranging them into beautiful designs throughout the home, town or city. Modern celebrations also include lots of fireworks and electric lights lining every building as far as the eye can see. The name Diwali, also often called Deepavali, appropriately comes from dīpa meaning lamp, and āvali meaning in a row, path.

Travel around India and ask the origin of Diwali and it is possible that you will get a different answer from each person you meet. For some it is the celebration of the new year, for others it is a carryover of the age old celebration of the harvest. It is a time to give thanks for the bounty we receive, the abundance of life, when windows are opened to welcome Lakshmi into the home. For Sikhs it is a celebration of the freedom from imprisonment of Guru Har Gobind Ji. For Jains, it is the day when Mahavir Jain attained moksha, or enlightenment. One of the most popular stories told throughout India, though, is from the Ramayana, an ancient epic with over 24,000 verses and 500 chapters, dated from the 5th century BCE.

Once upon a time, Lord Ram was born a prince in the Kingdom of Ayodhya. As he grew, the King’s wife became jealous of Ram. She demanded that the King exile Ram and his beautiful wife Sita from the kingdom so her son could take Ram’s place as next in line for the throne. Because the King had vowed to honor all his wife’s requests without exception, he sent Ram and Sita into the forest for 14 years, and Ram’s loyal brother Lakshman followed. After a few years in the woods, Ram and Lakshman were approached by a demoness, Shurpanakha, who was completely smitten by the handsome Ram and Lakshman. Furious to be rejected by both of them, she revealed her ferocious demon form and attacked. Lakshman cut off her ears and nose, sending her running, defeated, back to her home in Lanka. Her brother, Ravana, King of Lanka and an incredibly powerful demon himself, saw what Ram and Lakshman had done and vowed revenge on the brothers.

Employing the help of a demon in the shape of a golden deer, Ravana distracted the brothers and kidnapped Sita, bringing her back to Lanka and imprisoning Ram’s beloved. Knowing that something was wrong, Ram and Lakshman went looking for Sita, and conveniently 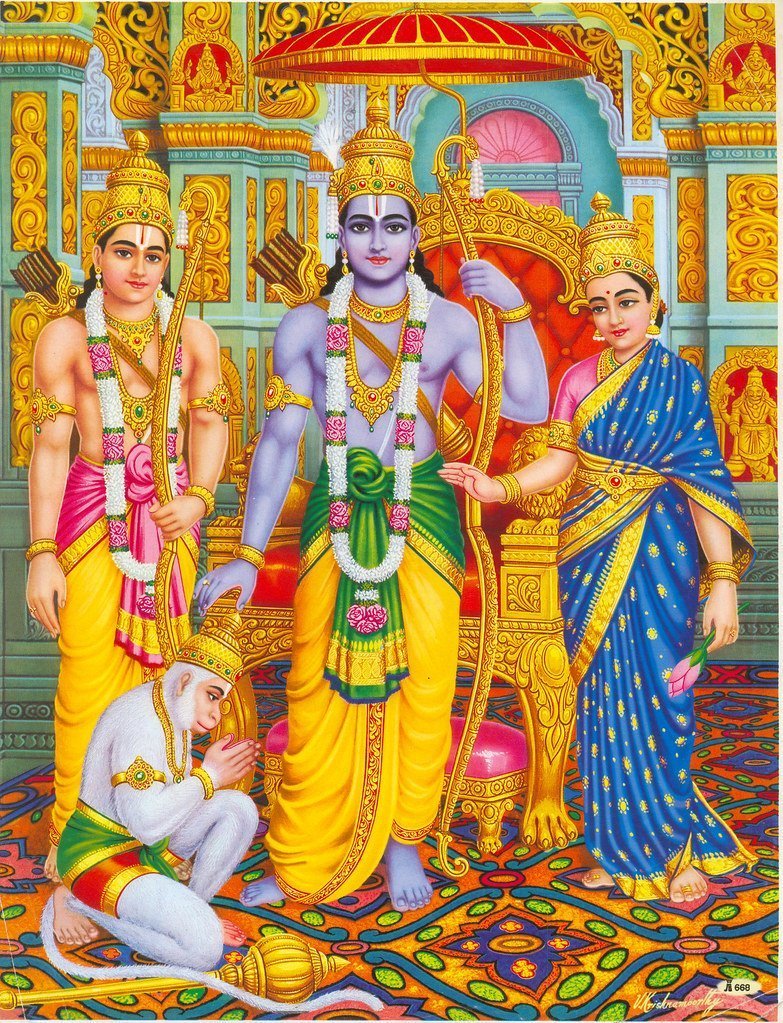 ran into a giant army of monkeys, bears, and men led by Hanuman, the monkey god. Recognizing Ram as the incarnation of God, Hanuman vowed to serve him and help him find his love, Sita. In another handy stroke of luck, Hanuman could fly and was so strong he could move mountains to help search for Sita, and he discovered her being held captive by the demon King Ravana in Lanka.

Cue a truly epic war between the gods and demons, where all the demons were massacred except one: the all-powerful King Ravana. Ram tried everything to defeat the demon and nothing would harm him. It took the renegade advice of Ravana’s brother to reveal the weak point of King Ravana; his navel.

In true ancient epic fashion, Ravana was defeated with a single arrow to the navel. Hanuman, Ram and Lakshman rescued Sita, and their 14 years of exile auspiciously came to an end. They returned to Ayodhya where they were welcomed with parades, flowers, and lamps lit all along the streets and in every window, as the city welcomed their true King home. A happy ending if there ever was one.

There are so many ways to read and interpret this engaging epic, and for me it is truly a tale of the return to the Self, the return to the recognition of god, of the light within. There are so many circumstances in life where it is possible to “exile” ourselves, to see separation between the physical world and our true nature. To leave the kingdom and enter the forest is to step out of the remembrance of who we truly are—god, the incarnation of god, the avatar of Light—and begin to fight to survive in the harsh illusion of separateness. Not only does our true nature become perceived as separate, but the masculine and feminine parts of our self become divided, kidnapped, searching, fighting. It is only through the battle of internal “demons”—our negative patterns, lack of self-love, forgetfulness of who we truly are—that we merge these parts of our self and are able to return, whole, to the kingdom of the Self, the Light. This is the merging of the small self with the Self, with the light of the heart, the light of Source, with all-that-is.

Take a moment this Diwali and join millions of people around the world in lighting a lamp, a flame to dispel the darkness that covers the light, a lamp to remember and expand our own inextinguishable Light within. 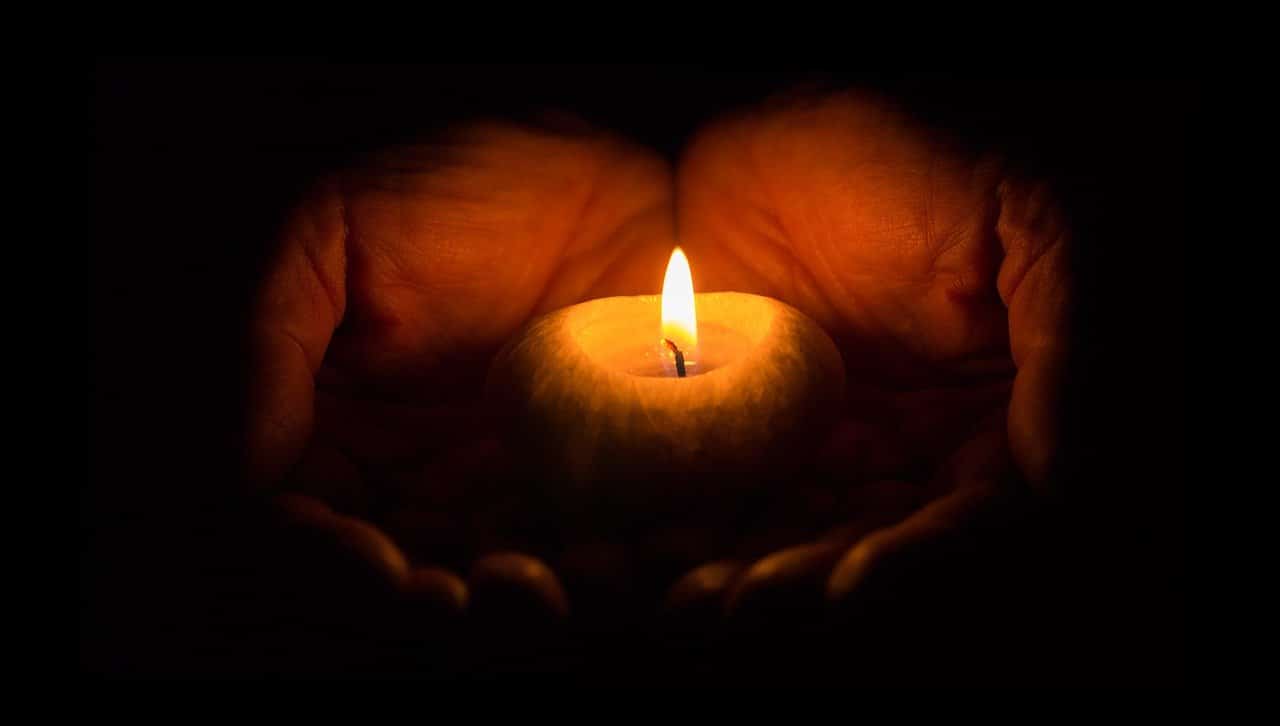